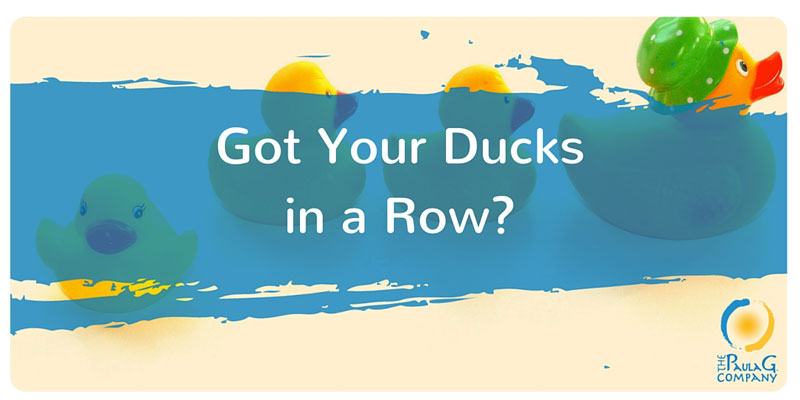 Have you ever tried to chase a flock of ducks and get them to do what you want?

There you are in your weekend best sweatpants running with Kennedy flair at the park saying:

“Here Donald line up behind your friend Daffy and by all means behave!”

How did that go?

More importantly… do you have a video of that? (I am certain it will go viral on YouTube and make you an online legend).

Silly, right? Yet I can’t tell you the number of times I hear business owners say that just as soon as you:

THEN, you’ll be ready.

Except, as soon as THEN arrives,  there will be another list of 10,000 things that need attending.

After THAT, THEN you’ll be ready.

Have you ever taken a ride on this crazy train?

Getting Your Ducks in a Row is a Myth

As soon as these proverbial ducks get in a row, they will get knocked out of alignment again.  That is simply how life and business works.  Not to mention ducks have a mind of their own. If you get hung up on worrying about having things “organized” or “perfect” before you dig in an take action, you will be waiting a very long time.

This idea that you can ever truly be ready for what gets thrown at you is a myth.  Yes you can prepare diligently, but you cannot bend reality to fit your version of it. In fact I’d argue that if we know something is coming it becomes the root of our suffering. Expectation (positive or negative) can create a lot of undue angst in a person. It feels worse than sand in your bathing suit (chafe, chafe).

Instead, consider what it would be like to step out and take action now (not later).

What might be different if you were willing to be comfortable with being uncomfortable and trust in your skillfulness to handle whatever gets thrown your way?

Set the Ducks (and Your Need to Control) Free

Nine times out of ten, when I hear someone say “I’m trying to get my ducks in a row” what they mean is “I need an excuse to avoid taking action, feeling my fear, or being vulnerable and this sounds like such a grown-up and valid reason”.  It feels like the responsible thing to do.

Being a responsible adult is good, but remember all the BS we’ve been told throughout the years?

Don’t confuse making intentional choices (even if they seem wacky to someone else because it breaks their worldview) with being irresponsible. 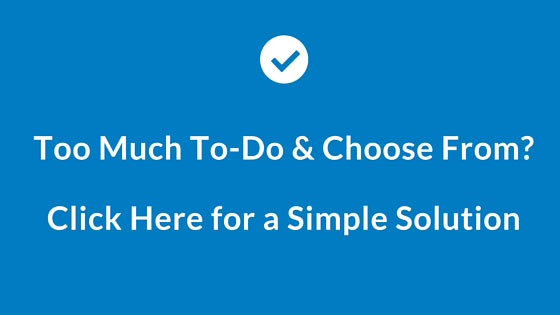 It’s not. Your choices are your choices. Make them intentionally and thoughtfully and get going.  If your thinking is too clouded for that right now, create breathing space first and then revisit your next steps.

Just stop herding those darn ducks!  Because when you’re busy herding ducks, you are avoiding the issue and indulging in the illusion that busy=good.

You can lose days, months, or years to this sort of thing.

How to Break the Duck Herding Habit

First, don’t feel badly if you wake up one morning and find you are running with the ducks. It happens to all of us.

Acknowledge it is happening and then re-frame your thinking and actions.  Most people agonize over trivial details that might move you ahead 2% at best.  Instead ditch the ducks and focus instead on the fundamentals and choices will make an impact of 80% or more.

While you are fooling around with waterfowl, you are generating exactly no income during that time (and you certainly aren’t cultivating joyful living either).  Stop using these distractions to avoid the hard decisions and return to the fundamentals.

Fundamentals might not feel sexy but they are the things that win sporting championships, leave the audience breathless at a performance, and grow businesses that put dinner on the table and money in the bank.

Remember you do not have to get all your ducks in a row before you can:

In fact I’d suggest you do all 3 of these starting now and you just might find those pesky little ducks lining up more frequently all on their own.